On April 14, a joint meeting of the NHNAC and the WAC with the community and city officials to review traffic designs for the new Zervas School. At the top of the archive on this page are slide decks that accompanied the evening. An update from the development team is also posted.

There will be a Board of Aldermen meeting this Wednesday, November 12th at 7:45 PM, Second Floor, Newton City Hall to review and potentially vote on the 5-58 site plan.

The documents that the Aldermen are currently reviewing in advance of this meeting can viewed here:

There are additional design renderings (street-level mock-ups), and more detail about what the Design Review Committee is recommending in this packet.

Several things have happened or are in process that will be discussed at the November 12th meeting:

Chris Neal is a Waban resident and member of the Zervas School Building Committee.  He has set up an email account to receive input from the community.  He will also be emailing updates and the occasional opinion polls to the people on his distribution list.  If you would like to give Chris your comments on the Zervas project, or if you would like to be on his distribution list, please email  ZSBC.Community@gmail.com.

The Newton Highlands Neighborhood Area Council is in the process of gathering community opinion on the Zervas School Expansion Project and would appreciate your taking a moment to fill out the following survey online at http://bit.ly/NH-school-survey. If you would prefer a paper copy, please call 617-340-9262. Thank you in advance for your participation.

The tree cutting has started furthest from Beethoven Road, and they cleared the property line between the school and Cold Spring Park.  They will come back on Oct 17 with a crane to remove the big trees and the trees in the playground area.

After the weekend of October 17, work will stop until January when the children have left the school.  There will be no further Zervas updates until January.

Starting in November, temporary fencing will be put up, then selective tree removal, pruning, transplanting and other site preparation will begin.  They will check into how this will affect Kindergarten Soccer.

In January, the site prep will be wrapped up and they will move into abatement then demolition.  For the month of January, most of the work will be interior abatement and demolition.  The exterior demolition will occur February through March.  They will work 7AM-3:30PM and on Saturdays, never before 8AM.

The traffic on and off the site will come primarily from Beacon Street.  They expect to rarely use Beethoven.  There will be no contractor parking allowed on the neighborhood streets; the majority of the parking will be accommodated on the site.

Neighbors can expect to be notified via email, flyers, robo-calls and lighted sign boards, as well as at these meetings, currently 6:30PM at the Waban Library Center, 1608 Beacon Street on the second Thursday of the month.

There will be vibration monitors on the site.

Zervas School Building Committee update (April 14, 2015) The presentation used at this meeting can be found on the project website here: http://zervas.projects.joslinlesser.com/download/presentations/2015%2004... Of note: 1. 1) The exact East-West placement of the classroom wing of the building will remain where it was as of the last project update (i.e., the 3-story wing will be roughly equivalent in distance from Beethoven Ave to where the current front of Zervas building sits). There was a lot of previous discussion between the building committee and Newton’s Conservation Commission striking a balance between keeping the back of the building as far away from the Cold Spring wetlands setback vs. the local community wanting the building set back further from Beethoven Ave. Page 3 of the document link above has a bird’s eye view of the final building placement. 2. 2) There will be a 3rd playground (for K-1) near the front (Northwest-facing) entrance, in addition to the grades 2-3 playground near the Southwest corner of the property and the grades 4-5 playground in the Southeast corner of the property. The placement of the three playgrounds shows up in light blue with red icons for the equipment on page 3 of the document above. 3) There has also been exploration about how to make the Southeast cornered playground (the one closest to Cold Spring) nature-themed. There are several examples of nature-themed playgrounds from other sites within the presentation linked above. There was discussion at the meeting related to whether to include a fence or natural buffer between the play fields and Beethoven Ave at all, and what kind of fence or buffer to have there. Educators are pressing for it for safety reasons (e.g., balls going out into the street). Others are concerned that it makes the property less inviting, could be an eye sore, and could get damaged by snow plows during the winter. This issue will continue to be debated (i.e., it is not set in stone by the 100% DD document approval). General schedule update: both the Angier and Zervas processes remain on schedule. The Angier community is slated to move from the Carr swing school back into the new Angier building over the December 2015 break, and the Zervas community will move into the Carr swing space immediately thereafter, with Zervas classes resuming in the Carr building beginning January 2016. Newton Public Schools has been working on after-school options with educational activities for Zervas families during the additional planned moving-related half-days prior to and immediately after the standard December vacation break. Budget update: The 100% Design Document was reviewed by two different professional estimators who independently came within $2,000 of each other’s estimates on a building construction budget of $29M (i.e., based on the current design plan, the building is looking very much on budget). Also of note: the city is in full swing working on specifics of the redistricting that will phase in after the new Angier, Zervas and (later) Cabot schools are back open. An open Student Assignment Working Group meeting was held Thursday, March 26th. The SAWG reviewed the tools and processes that they are using. A playback of this meeting is available online at: http://www.newtv.org/video/sc/032615/ starting at around the 4:30 mark, and the presentation document can be found here: http://www.newton.k12.ma.us/Page/2354 Traffic: nothing new to report here yet. Bill Pailey (head of Transportation Department for the City of Newton) has been focusing on traffic issues surrounding the new Angier school site. Once those are settled, he will be focusing on the variety of traffic and safety-related issues that the community has raised related to the new Zervas school. As always, if you know of others who would be interested in these updates they can email zsbc_community@gmail.com with the word “subscribe,” and if you ever grow tired of these updates simply Reply with the word “Unsubscribe.” Best Regards, Chris ZSBC Community Representative

Earlier Post:
The Zervas School Building Committee (ZSBC) met for the second time on February 27, 2014. At this meeting, Joslin Lesser and Associates (JLA) reviewed the school’s educational program for both interior and exterior spaces and the alternative site selection matrix criteria ratings. After discussion and consideration of the feasibility of the proposed sites, the ZSBC recommended the existing Zervas site as the best location for meeting the criteria. In addition, Design Partnership of Cambridge presented some draft test fits building configurations on the existing site. More work will be completed by the designer on building design alternatives and these will be presented at the April 3, 2014 meeting.
On March 11, 2014 the first Zervas Open Parent Forum was held at the school. Members of the School Committee, school administration, project team and ZSBC reviewed how the Zervas building project was initiated, the goals and objectives of the project, the steps taken in the process to date, including the development of the educational program and evaluation of alternate sites, and a project timeline. Members of the Zervas Community were able to ask questions and provide input as to their concerns about the size of the new school.
Key upcoming meetings:
There is a Zervas School Building Committee (ZSBC) and Design Review Committee (DRC) joint meeting scheduled for Thursday, April 3, 2014 at 7:00PM in the Newton Education Center at 100 Walnut Street, Room 210
For more information, including materials such as the educational program, site alternatives and selection matrix, please use the following web link:
http://zervas.projects.joslinlesser.com/
-- from report by Sandra Guryan, Deputy Superintendent/Chief Administrative Officer to Superintendant of Schools and the School Committee 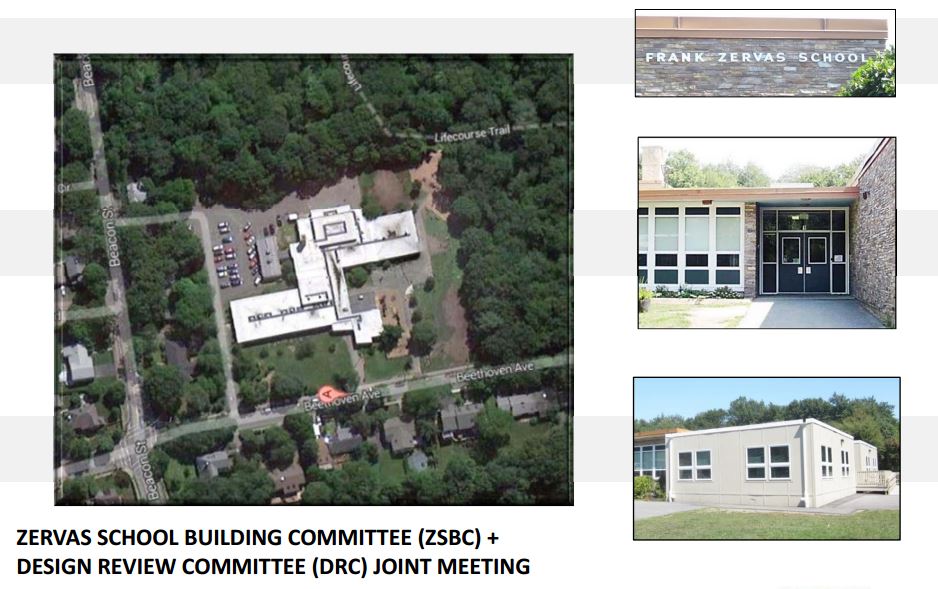 final version of board order 255-14 for proposed Zervas

NZO §5-58. Site plan approval for construction or modification of municipal buildings and facilities.pdf