On Tuesday March 3rd Newton voters will be asked to vote on a ballot question to either approve or disapprove of a City Council Action that approved the change of zoning districts for the land located at 156 Oak Street, 275-281 Needham Street and 55 Tower Road. These three parcels combined are considered the Northland project site.

Northland is the name of the redevelopment project located at the end of Needham Street and Oak Street in Newton Highlands. The Northland Investment Corporation submitted and received approval from the City Council on December 12, 2019 for the requested zoning district change of their parcels (shown in the site map below) as well as their special permit request for the redevelopment project. 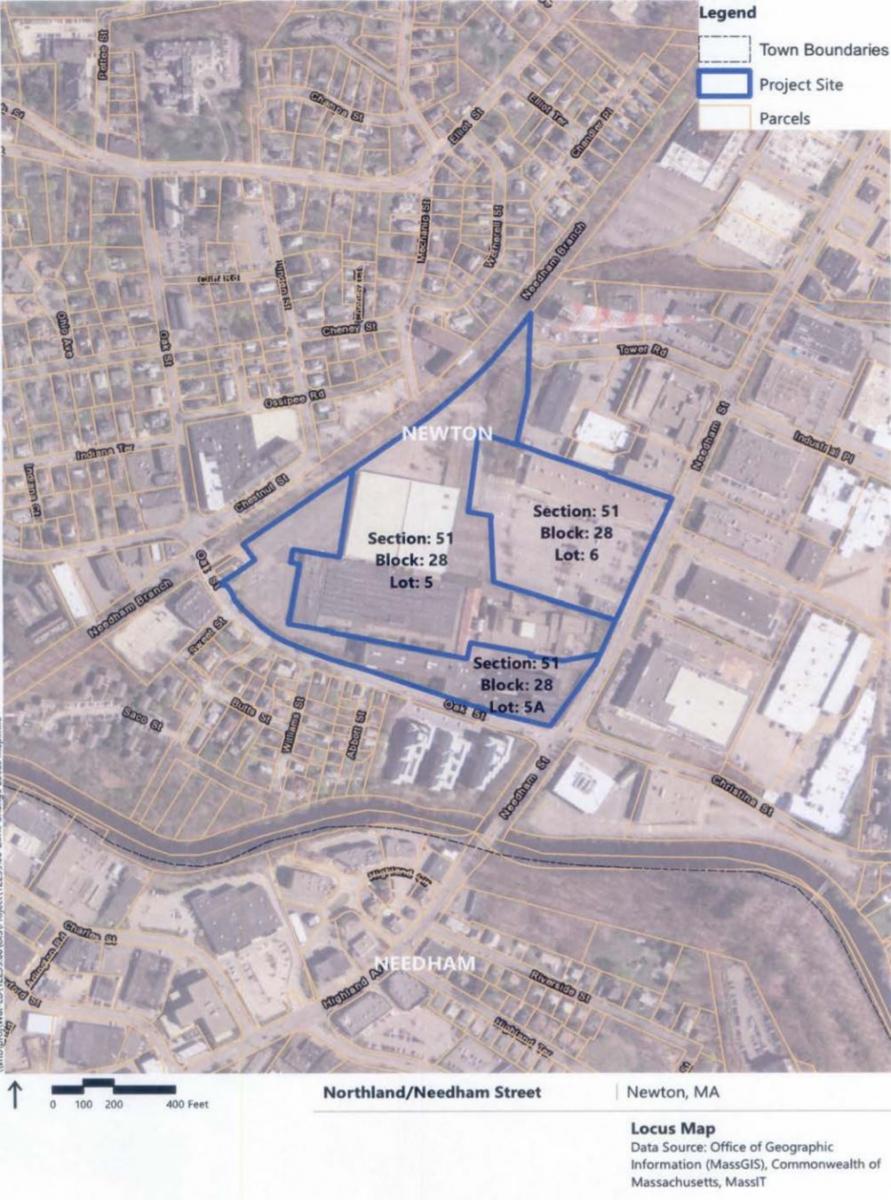 A rezoning request was submitted as part of the special permit request asking for a change of zone from Mix Use 1 (MU1) to Business Use 4 (BU4).

What is the Northland Project?

The Northland project is Mixed Use redevelopment project (imaged below) that is comprised of 14 buildings (3-8 stories - varying heights with potential building heights up to 96’). Predominantly residential (~1,100,000 sf) with office (180,000 sf) and commercial (115,000 sf) Use space. It was permitted through the special permit process in the Land Use subcommittee of the City Council with the public hearing opening in September 2018 and closing a year later.

All pertinent documents of the Land Use meetings can be found at the city of Newton Northland webpage.

The filed Board Order with the findings and conditions for the project can be found here.

What are we asked to vote on March 3?

We, the voters are being asked to approve (yes) or disapprove (no) the City Council Action that approved the required zoning change as summarized in the text below.

The City of Newton will hold a Special Municipal Election on March 3, 2020, the same day as the Massachusetts Presidential Primary Election. Voters will have an opportunity at the Election to vote on a ballot question to either approve or repeal a measure passed by the City Council that changes the zoning district of parcels of land located at 156 Oak Street, 275-281 Needham Street and 55 Tower Road, commonly known as the site of the Northland Project.

The ballot question asks whether voters will approve an amendment to Newton’s Official Zoning Map that changes the zoning of the Northland site from the Mixed Use 1 District to the Business 4 District. The zoning change was voted upon and passed by the City Council on December 2, 2019. The zoning change allows for the construction of the Northland Project under a Special Permit and Site Plan Approval approved by the City Council.

A “YES” vote on this question would allow the zoning change that was passed by the City Council to take effect, and the Northland Project, as approved in the Special Permit, may be constructed.

A “NO” vote on this question would stop the zoning change that was passed by the City Council from taking effect, and the Northland Project, as approved in the Special Permit, may not be constructed.

A copy of the Special Permit and other materials related to the Northland Project, including plans, renderings and memoranda, can be found on the City’s website. The following link will direct you to the Planning Department’s Northland page:  www.newtonma.gov/northlandproject

The arguments of the two formed ballot committee are listed below. Please visit their respective websites to consider their positions and opinions (linked below).

Vote NO to reject Northland Investment Corporation's current plan for develpment on Needham Street. The property should be developed, but it should not be over'sized, overwhelm local infrastructure, or burden city finances. The City Council approved a 1.4 million square foot development with 16 buildings and 800 apartment units -too dense for the area and not enough affordable units. We want development to represent  Newton's progressive, inclusive values.

Both the City and the developer agree that traffic is a problem on Needham Street, an area without access to public transportation. This development will increase congestion causing even more traffic which will spill into adjacent neighborhoods. Additionally, 800 units will likely add to school enrollment and costs to taxpayers.

We welcome development at this site and elsewhere in Newton, but it should be in partnership with our residents, not driven by developers. Vote for responsible, responsive Newton growth.

A YES vote will position Newton as a forward-thinking and welcoming community for all. The Northland Newton project embraces Newton's values by providing affordable housing to working people and retirees, creating much-needed open space, and setting the highest standard for environmental sustainability.

The project will create an unprecedented amount of new public open space accessible to all Newton residents, including seven parks, 750 new trees, a splash park, community playground and a village green.

This project would be the most environmentally sustainable mixed-use project in Massachusetts and has earned the endorsement of prominent Newton environmental organizations.

Vote YES for an inclusive and sustainable Newton.

Please take the time to visit the websites of the ballot committees to consider the arguments of either side before voting on March 3rd.